What is a Coin Halving?

To understand the impact of a halving event on HNT, it is important to understand the process of halving. Ultimately, halving reduces the issuance rate of new coins by cutting down on the block reward provided to miners. This ensures that the amount of a coin in circulation does not increase exponentially, decreasing the supply being released and thus decreasing the rate of inflation for a cryptocurrencies value.

Halving events have historically been heavily influential on cryptocurrency prices. The decrease in supply results in higher demand, which pushes the price higher. Also, buyers often purchase an asset in anticipation of a halving which results in a price increase. Historically, the period following also comprises a gradual price increase. Overall, the consensus is that halving shows bullish trends both before and after the halving date. However, each event is unique and can have different results.

August 1, 2021 will mark two years since the Helium genesis block. With each halving scheduled to occur every two years, this date marks the first halving of HNT. It will reduce the net HNT issuance from 5 million HNT to 2.5 million HNT per month. Below is a chart showing the first 10 years of HNT supply and minting.

What happens when minting isn’t able to reward hotspots?

“Net Emissions effectively recycle a pool of ‘burned’ HNT available for use in rewarding Hotspots, when there are no longer enough provided through minting. The Net Emissions allow rewards to exist in later years, while also not extinguishing deflationary pressure after the cap has been reached. After the cap is exceeded, the overall value of the network should increase, satisfying a Burn-and-Minted equilibrium.”

How is the net emission cap decided and when will it come into play?

The most notable case study is Bitcoin’s halving. Bitcoin’s genesis block was on January 3, 2009 and halving occurs every 210,000 blocks. This takes place about every four years. The first one was on November 28, 2010, the second one was on July 9, 2016, and the latest one was on May 11, 2020. The original mining reward schedule was 50 BTC per block, and each block occurs approximately every 10 minutes. Because of the three halving events, the mining reward is down to 6.25 BTC per block. The chart below shows the bullish sentiment associated with each halving. 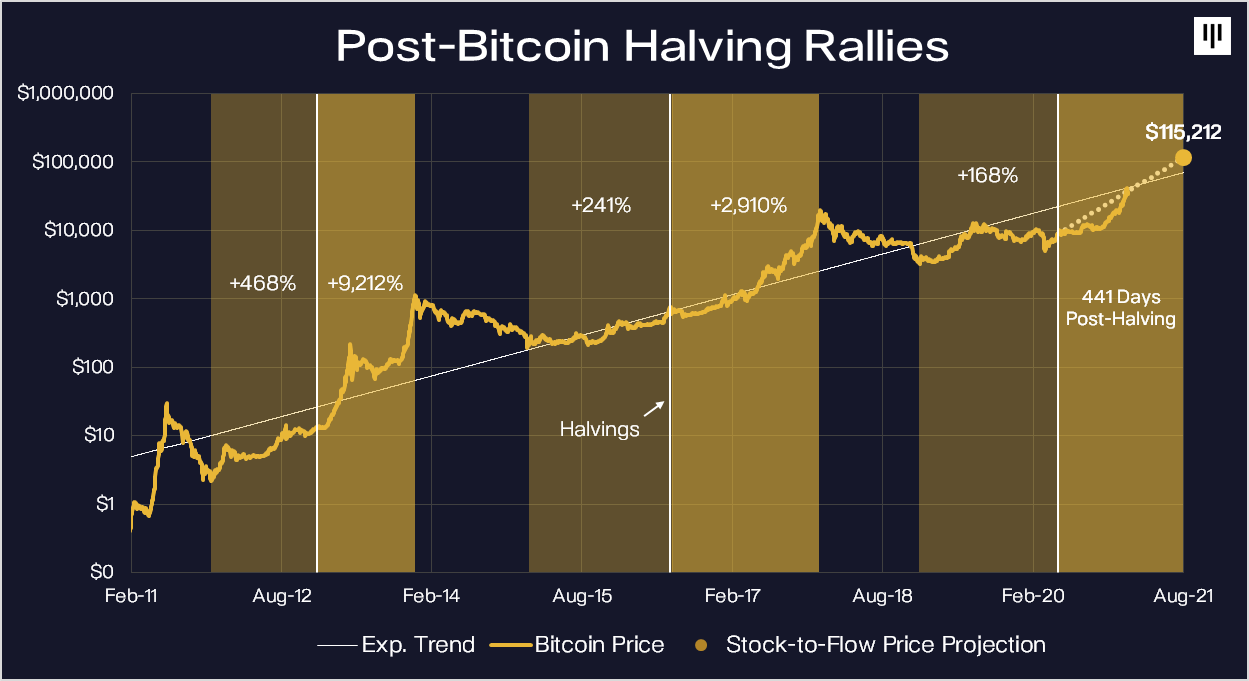 We don’t provide price predictions for the HNT token. Our outlook is based purely on the network and the services we are able to provide on it. Based on the growth of the network itself we are very bullish on the ability to build solutions across many industries and support a sector of growth never before seen.

Our company holds HNT from time to time for various reasons including Data Credits for services we provide customers and clients. Our content is intended to be used and must be used for informational purposes only. It is very important to do your own analysis before making any investment based on your own personal circumstances. The information contained herein is not a substitute for financial advice from a professional in connection with any information that you find and wish to rely upon, whether for the purpose of making an investment decision or otherwise. We have done our best to ensure that the information provided is valuable but, regardless of anything to the contrary, the facts and circumstances of your individual situation require independent research and verification. As such, we expressly recommend that you seek advice from a professional.

What is a Coin Halving?